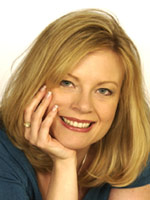 Shirley Kawa-Jump didn’t have the willpower to diet nor the talent to master under-eye concealer, so she bowed out of a career in television and opted instead for a career where she could be paid to eat at her desk—writing. She started out in journalism, selling her first article at the age of eleven. She hosted two of her own shows on the local cable channel and was the co-host of a late-night comedy show for two years. After writing 3000 articles and two non-fiction books, Shirley decided a career as a freelance writer suited her better.  Humor got her through mashed potato flingfests and toilet paper decorating sprees. Seeking revenge on her children for grocery store tantrums, she sold embarrassing essays to anthologies such as Chicken Soup for the Working Woman’s Soul and Chocolate for Women II.  Then she turned to the world of romance novels, where messes are (usually) cleaned up before The End and no one is calling anyone a doodoo head. Shirley has sold over twenty-five novels and now writes stories for Harlequin/Silhouette and Kensington Books about love, family and food—the three most important things in her life.